Chinese New Year, Lunar New Year, Spring Festival. Whatever you call it, this most colourful festival is celebrated in a big way in San Francisco’s Chinatown district. The date that the festival falls on changes from year to year depending on the phases of the moon but it’s always in January or February.

San Francisco Chinatown is a fascinating destination at any time of year but at the beginning of the year it’s especially beautiful with the abundance of red lanterns and banners as preparations take place for the most colourful period in the city calendar (outside the Gay Pride parade, anyway).

The festivities in Chinatown include:

Miss Chinatown USA Pageant: this quaint contest attracts hopefuls from Chinatowns around the US. Each to their own.

The Flower Market Fair takes place the weekend before New Year so that local families can decorate their homes in celebration of the festival – flowers are thought to bring wealth and a high-flying career. Expect to see peach blossoms, narcissus, orchids and bamboos. Oranges and tangerines are also for sale as they are are symbols of abundant happiness.

Chinatown Community Street Fair: traditional Chinese arts and crafts are celebrated on the same weekend as the New Year’s Day Parade. Local groups present folk dances and demonstrations of folk arts such as lantern and kite-making. The kids will enjoy the Chinese puppet shows. 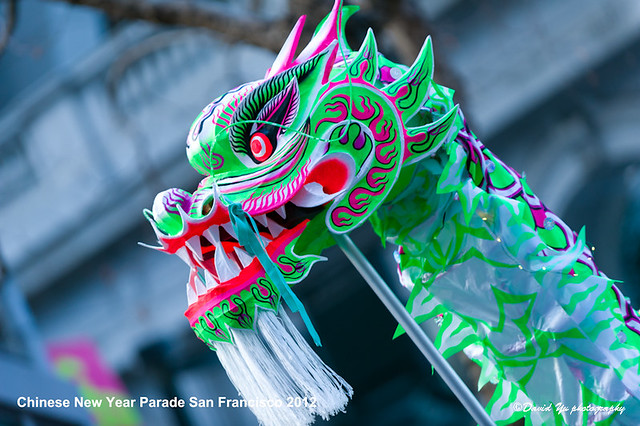 The Chinese New Year Treasure Hunt takes locals and visitors on a four-hour exploration of little known or forgotten San Francisco landmarks, following clues and cracking codes.Those who solve the clues in the shortest time earn the prizes at the end of the night. This event takes places on the evening of the New Year’s Day Parade.

Chinese New Year Run: Around 1500 participants take part in this 5k run/10k walk. An excellent incentive to keep off the mince pies around Christmas as you’ll be in training. Again, each to their own :o)

And of course, the New Year’s Day Parade, taking place approximately two weeks after Chinese New Year’s Day and consisting of around 100 floats and bands. This Chinese Lantern Festival/American parade mix has been around since 1860 and is the oldest festival of its kind outside Asia. The parade features the newly crowned Miss Chinatown USA, dragons including the Gum Lung golden dragon which is so large it has to be supported by 100 people, and of course lots and lots of firecrackers.

Finally, some tips for the day of the parade to make the event as enjoyable as possible.

Bleacher seats are available and expect the parade to last for two to two and a half hours.

Gung hay fat choy! (May prosperity be with you) and have an excellent Year of the Snake.

When not around traveling, Julie is writing about travel ideas & tips. She regularly writes for Fortina Spa Resort, a 5 star hotel in Sliema, Malta, specializing in state of the art wellness & Spa treatments.