The week-long holiday called Sukkot is observed by Jewish people from around the globe. Also called the Feast of the Tabernacles and the Festival of Booths, Sukkot happens four days after the culmination of the Yom Kippur, and is immediately followed by Simchat Torah and Shmini Atzeret. The Sukkot is associated with three major customs including the erection of a sukkah, taking sustenance within the confines of the sukkah, and etrog and lulav wielding. Among these three traditions, the building of sukkah is perhaps one of the most anticipated and venerated by the Jewish community.

The sukkah is a short-term and makeshift dwelling which can be situated on a balcony or an open porch. It should ideally be equipped with at least three walls and an organically produced roof called the s’chach. The height of the sukkah should be no less than three feet, and the roof, in its entirety, should be placed directly under the sky so as for the implement to be considered kosher. The sukkah’s walls, unlike its roof, may be fashioned from all types of materials, so long as the said material is unyielding or rigid enough. Sukkah walls which tend to sway in the wind are not deemed Kosher.

Aside from the aforementioned sukkah necessities, many people also incorporate other aesthetic and design elements to their sukkah. The most popular of these decorations are wheat, grapes, pomegranates, dates, barley, figs, and olives, which happen to be quite relevant to Israel’s biblical history, as accounted in Deuteronomy 8:8. Other decorative options include etrog, streamers, pictures, and even all sorts of shiny objects. Some families even go as far as installing white interior sheeting on their sukkah so as to commemorate the “Clouds of Glory” which had enveloped the Jewish nation during its people’s desert journey. Although, there are some Jewish customs, such as that of the Chabad’s, that adamantly reason against decoration of sukkah. For them, sukkah in its most basic is already beautiful. 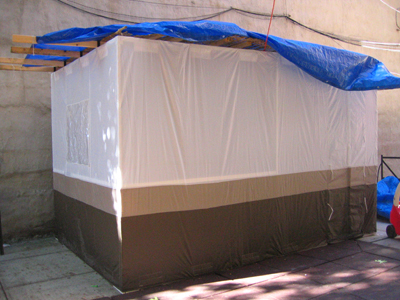 S’chach
The construction of the s’chach, or the sukkah’s roof cover has to comply with specific kosher guidelines. The most basic principle is that the materials which can be employed to complete the roof should come from the earth, and they should, by the time of usage, have already been disconnected from it. The most common unprocessed materials used to create s’chach include palm leaves, pine braches, bamboo sticks, and wood. Materials that have been previously employed to cater to other purposes do not qualify as kosher components.

Another rule of thumb for s’chach is that it should provide ample shade, but, at the same time, be equipped with sufficient gaps so as to allow rain to come through.

Origin of Sukkah
The sukkah tradition dates back to ancient Israel. During those times, Jews built makeshift huts during harvest season on their field’s edges. These temporary dwelling allowed them to maximize their harvest, and at the same time provided shade whenever necessary. It is also believed that sukkahs are a representation of the Jewish people’s shelters during the 40 years in which they wandered through the desserts, as recounted in Leviticus 23:42-43.

Gershon Shaw is a writer and blogger at Sukkah World, a wholesaler and retailer of high quality sukkahs.