Silver is a precious metal which is known for its clean and appealing appearance as well as its relatively low melting point and high conductivity. Most silver that we use today is gathered from ores such as argentite. Pure silver is incredibly valuable. Most silver jewellery is made of silver that is mixed with other metals to make it stronger. The purer the silver, the more valuable the jewellery is. The purity of silver is measured on a scale of millesimal fineness, with higher numbers being better. 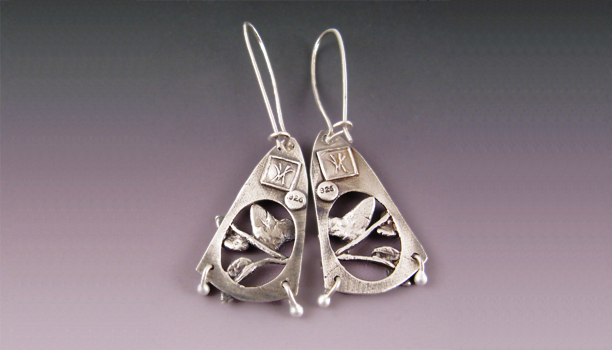 Not all jewellery that describes itself as being “silver” actually contains silver. Some so-called silver items are actually alloys that are closer in content to brass. If you are shopping for some jewellery, you should examine each item carefully to make sure that you are getting a genuinely valuable item. Appearances can be deceptive and just because something looks shiny and appealing, it does not mean that it is really silver.

Here is a quick look at the most common kinds of silver.

Hallmarks are found on most kinds of valuable silver. The hallmark is a stamp which is put on the item, indicating the purity of the silver, the place it was made and the year of manufacture, as well as who made it.

Hallmarking has been done for hundreds of years and makers’ marks have been common throughout history. It would be incredibly unusual to find a piece of genuine silver jewellery without a hallmark.

Britannian silver is a silver alloy that is made of 95.84% silver, with the rest of the alloy being copper. This kind of silver has existed since 1697. The standard was created by the British government as a replacement for the less pure Sterling Silver for the production of items of wrought plate. Modern Britannian Silver can be recognized by the millesimal fineness hallmark of 958.

Mexican silver has a minimum purity of 92.5%. This type of silver became extremely popular just after the Second World War because it is relatively cheap and widely available. Older items made of Mexican silver can be recognized because they carry a hallmark shaped like an eagle with its wings spread out. Inside the eagle is a second marking to indicate where the item was made and the exact value of the silver. Items made after 1979 will not carry this hallmark.

Alpaca silver is not actually made of silver. It is a metal alloy which usually contains copper and nickel and may sometimes contain zinc, tin and cadmium. This alloy is usually used to make musical instruments because it is hardwearing and attractive and produces a powerful sound. Alpaca-silver saxophones are considered highly desirable because of the sound that they produce.

Some jewellery companies in South America produce Alpaca-silver jewellery because of the low cost of this alloy and its striking similarity in appearance to Sterling Silver. It is common for these jewellery makers to plate their jewellery with real silver to increase the value of it.

German silver is similar in composition to Alpaca silver. It is not a real silver and has a far lower value. It is commonly used in plumbing, heating coils and industrial machinery. It is non-corrosive, hardwearing and highly resistant to electricity. In some cases, German silver is plated with real silver to create a more desirable appearance.

Some jewellery makers use the term ‘Tibetan silver’ to describe jewellery made with an iron casting, which is then overlaid with pewter and plated with silver. The quality of this kind of jewellery varies massively. When well-made, it is robust and can last many years. Some cheaper variants are incredibly fragile and can chip or break easily.

To avoid buying fake silver items, watch out for sellers that describe items using the words ‘plated’, ‘clad’ and ‘mills’. The term ‘mills’ is used to describe the thickness of the silver plating. So if you are buying a bar of silver and it is described as .999 fine silver, 100 mills, then what you will get is a bar that may be made of copper or some other worthless material and plated with a thin coating of silver.

If you think you have found a good deal on a silver coin, some jewellery or even a bar of silver, get it graded by an expert first. Do not let your desire for a great deal cloud your judgement and lead you into taking unnecessary risks.

This guest post was contributed by My Family Silver; suppliers of antique silver, crested family silver and modern silverware from the world’s leading dealers and auctioneers.