Described basically, a quarry is a man-made pit created for extracting many different kinds of stone for various uses.  Quarries are created in places based on a number of different factors, like where geologists find a large enough supply of rocks to warrant one and on how far away the quarry will be from neighbouring communities. 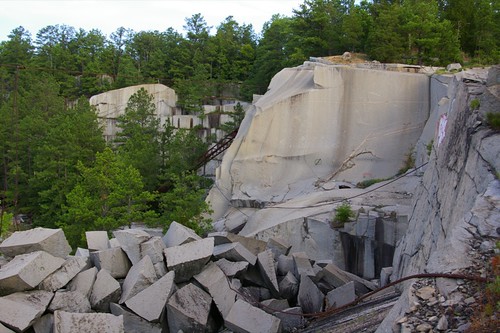 The rocks which are extracted are mainly used in construction, creating various building materials such as the bricks that make up the walls of a house and countertops for the kitchen.

How a quarry is made
After the potential quarry location is chosen, the site must be prepared. Quarries create a lot of noise, whether by the machines there or blasting that takes place, so buffer zones are set up to minimise the noise levels. Care is also taken on avoiding harm or disruption to the environment around the quarry area.

The earth in the new quarry area is then cleared so that the workers can get to the rocks below and begin creating the quarry itself. The rocks are removed by using drilling and blasting, which is changeable depending on the type of rock they’re trying to get out of the ground and the quantities of it.

This process is done by drilling a hole in the ground and then placing the explosives inside, causing the stone to break and loosen. The whole process is quick and effective at loosening the rock and allowing it to be taken from the quarry. It’s also monitored carefully to keep it as safe as possible for the people and environment around the quarry.

Once the rocks are loosened, trucks go in to remove them. This begins to create a pit, what most people refer to as the actual quarry.

Breaking down the rocks
The large rocks taken from the quarry are broken down in a crusher, which cuts down the rocks to the size required. They’re then separated up into different piles depending on the size they’ve been crushed too.

These piles are put into stockpiles which store the rocks until they’re required.

Drilling and blasting continues to go on at the quarry until all the stone that can be removed has been.

Some quarries are turned into landfill sites to satisfy the increasing demand for rubbish space. A premade hole in the ground is great for this, but not good for the local environment. Other quarries try to be restored, although this can be difficult because of all the missing rock.

Other quarries are filled with water and used as swimming and diving sites. This provides a safe, deep area for people to start out diving in. If it’s not used for swimming, the area filled with water might become a lake in a nature reserve instead. An abandoned quarry might fill up with water and become a quarry on its own over time too.